Small is beautiful – Trump is hardly….

Last weekend, I browsed boxes of old books in storage for a particular book, which had come to mind over the recent months, as I bewildered, amused and worried watched the rise of Trump, Brexit, Le Pen, (or for that matter Putin and Erdogan), nationalism, protectionism…. As I have pundered the “age of anger” (as Pankaj Mishra entitled the trumpian attack of liberal rationalism), I have also begun a search for idealism. Be it liberal or left wing, I am on a search for a positive radical thinking, which can shed a different light on drama playing out in front of us.

As so many others, I am fed up with todays massively disillusioned politicians, journalists, academics, all caught up in the consensus of technocratic managerialism, and all incapable of understanding, much less emphasizing with the angry crowds.

The book that I wanted to dust off, and revisit was E.F. Schumacher’s seminal book from ‘73: the collection of essays Small is Beautiful with the subtitle A Study of Economics As If People Mattered.

I remember reading Schumacher back in high school, and the thinking has in some ways been influential on my professional career as an innovation consultant and designer working on disruptive and radical change.

And I felt, that it was time to re-read with an eye on the trumpian anger.

Schumacher’s essays offer a great (sic) analysis of the problem of scale and the dehumanizing effect of economic growth as the central focus of politics. Published at the same time as the Club of Rome’s Limits to Growth report, Small is Beautiful offers an alternative to dystopia. He blends philosophical, economical and environmental critical thinking with a positive vision of the local, the small scale enterprise, the humans scale, as a valid and strong alternative to the all-dominating technocratic move towards centralization, urbanization, multinational enterprises, and homogenous consumption married to mass-customization. 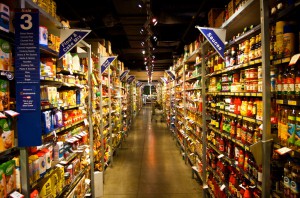 The spooky beauty of the modern supermarket captures gigantism visually

The term, that Schumacher uses for the monster he identified, is Gigantism – the endless drive of capitalism towards bigger, cheaper, more….. He of course described the result of industrialism, but he captures beautifully what we have come to see with the recent 30 years’ surge of the neoliberal world. A world of not just mass production, mass media, mass culture, mass consumption, but also of mass customization and mass individualism. With urban centers growing rapidly to multimillion megacities; with a massive centralization of power and control systems in the public sector dressed up as new public management; with constant consolidation in all industries and still fewer capturing still larger part of the economic value (e.g. industrial agriculture’s relentless consolidation closing literally thousands of small farms a day across the world), etc, Schumacher’s analysis rings a bell and provides a perspective on the age of anger.

As monopolies and oligopolistic firms outgrows nation states not to mention people, the promise of wealth and wellbeing for all offered by the all-dominating neoliberal consensus ruling media, politics, academics and business, rings more and more false to so many people. Schumacher’s gigantism is a dehumanizing force, bringing about a society at a scale inhuman. And this precise feeling could very well be the underlaying emotion driving the angry crowds. It is a much to real experience of large scale companies and organizations wrecking havoc with the commons – such as natural resources like fish and air – as well as with local individual lives (towns, farms, work places) – under the banners of prosperity, democracy and freedom.

And over the last decade it interesting how the notion of Small is beautiful has reappeared in the shape of and growth of micro-breweries, farmers markets, eco-villages, small private schools, hand craft based textile and design companies, etc. This movement heralds back to the days of Schumacher and early 70’s pioneers as Anita Roddick in the UK and Ben and Jerry in the US (both of course coopted by large scale corporations!), and is a testament to the deep and ongoing longing for regaining control and meaning – for creating a world on the human scale.

An observation, that’s hard not to make, is that whereas the Small is beautiful movement in large parts has been driven by left wing romantic idealists, the far right “take back our nation” movement shares many of the same sentiments, and basic emotional yearnings. Even if the shape and expression is ugly and seemingly without the compassion, that is very much at the center of Schumacher’s vision.

Rereading the book, many of Schumacher’s points stand valid and clear and offer insights also on the angry. Schumacher discusses at length the disconnect between happiness and material wealth, and todays exploding levels of stress, anxiety, depression, certainly confirms his worst cases, that he explicit warns against. And the recurrent theme of the false promises of equality, democracy and the wellbeing effects for all, has been made even clear as the neoliberal agenda has taken over both public and private sector leadership. 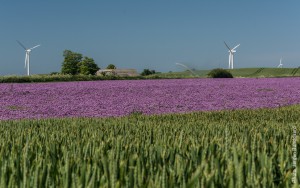 Samsø is an amazing story of a community becoming independent and CO2 negative. Together with Søren Hermansen, the founder of Samsø Energy Academy, we are scaling the Samsø Model and building a global network.

[On a professional note, I am, with a band of former corporate execs and entrepreneurs in the network organization Rebel Impact Lab, presently involved in a number of projects, exploring the potential of merging the small is beautiful localism, with network externalities and scaling to achieve more global effects. With Samsø Energy Academy we are building a global network of local renewable energy communities.

For other relevant projects please also see Fabbrica, a platform to enable small co-living communities realize projects is competition with large-scale developers. And see the case of Lejre: With the Municipality of Lejre, we are turning the whole technocratic approach upside down to empower local site-specific citizen-driven activities and solutions, and still offer collective synergies.]

About the Author: Lars Lundbye

Lars Lundbye is a futurist and innovation evangelist with over 20 years of experience working with international companies and municipalities on sustainable strategy and radical innovation within cleantech, architecture, infrastructure and urban development. Lately Lars has been focused on global water issues as Executive Strategist for Grundfos and development of water sensitive and sustainable villages, on new sustainable architecture and for 3XN, and urban planning, and on radical redesign of public services in municipalities for Lejre Kommune among other major clients. Lars is renowned for his ability to energise and motivate change and organisations, and his out-of-the-box thinking, that has inspired global businesses as well as numerous social services and innovative startups. With solid academic research behind him, miles and miles of walking the talk in live businesses, and decades of active practice in creative arts and mental development, Lars excels in crossing borders between deep research, hard business, the arts, and mental training; bringing unseen synergies and unique insights to clients’ projects. Lars has founded and chaired several successful companies, and sits on several boards. Both a practitioner and an academic researcher on innovation, Lars is Lead Faculty on innovation at CBS-Executive (Copenhagen Business School), and is a popular keynote speaker on sustainable innovation, co-creation and integral leadership. He holds an executive MBA from SIMI, a cand. phil. in Literature, and as a former dean of the Danish School of Television and co-founder of the Workz agency with the film company Zentropa, Lars has extensive experience working with storytelling and communicating purpose driven business strategies. Lars lives to create and enable revolutionary projects that empower people to be creative and innovative in creating a more sustainable, equitable and beautiful world. He is a passionate evangelist for holistic and integral thinking, and is a founding partner of Transition World in collaboration with The Club of Budapest and HeartMind Academy, training global top executives in new sustainable paradigms of development and leadership.